One day I shall rule all of Downworld Millan... nobody will look down on me when that day comes.

Gavin - much like many of the Icelandic people - is under the six foot mark, but only barely, standing at five foot eleven inches. He is stocks of build, with clear strength written in every bit of his form, strength which he likes to throw around. He especially likes showing off while swinging his sword and firing his bow.

Gavin has a very pretty pair of eyes - one of the truly soft things about the man - that are a blue-green color. He also has blonde-white hair that brushes along his shoulders but is usually held back from his face... when he is fighting at least. The rest of his face can be either harsh - when he is angry - or open and friendly - when he wants to impress people that matter.

He sticks with the covered clothing of most of the Icelandic people. The most notable thing he wears is the fur hood and the heavy fur boots that work to keep the man nice and warm - as well as adding a few more pounds it seems.

Gavin is a man of action - brave, impulsive, and straightforward. He is considered an inspiring leader, leading his men by example. In conversations with others, he appeared witty and easy-going, yet able to hold true to his decisions and make others accept them.

On the other hand, Gavin is very vindictive, known to lose control, and has never taken well to losing. He always seems to seek the approval of his betters (such as his father and Augustus) and often feels underappreciated... like he is somehow deserving of things, whether he truly is or not. He cannot stand the thought of others betraying his trust, as well as being controlling to a fault, even going as far as making his mistress promise never to deny him anything.

Gavin doesn't truly feel remorse, shame, or pity. He is a ruthless and cynical person with a grim sense of humor and is not above mocking his enemies and gloating over their defeats. His darker side is always lurking just under the surface of his easy going, good soldier boy façade.

Gavin Pierce was born to Marcus and Gabrielle Pierce, a man and woman who had it all. Marcus was Commander of Millan's noble fighters, the fiercest Commander Millan had seen in hundreds of years, hand picked by Governor Augustus Malachai himself. Gabrielle Pierce was the woman every other female wanted to be... married to a beloved man and living in the second biggest dwelling in all of Downworld Millan. The woman had servants and slaves alike, she was basking in it all, and all she needed was a child to love and spoil... and she got that with the birth of Gavin Jeffery Pierce.

Now this respect... did not journey over to women. In his father's eyes - and likewise in his own - women were the weaker sex. They were put in Eden to do as they were told and warm their husbands beds. For that they were protected and cared for, given what they needed to stay happy, and should keep their mouths shut. That was exactly how Gavin treated the women around him... he was polite to them - as any gentlemen should be - but he truly held no respect for the weaker species. That was all it was... until he found his mother in bed with someone other then her husband, that was when his thoughts on women changed.

When Gavin was thirteen years old - already a soldier being trained - he walked in on a sight that skewed his thoughts on women forever... his mother in bed with another woman.  Now the fact that women slept with women... that did not really bother the boy. He was a hormonal teen who'd already experimented with multiple women and found he rather enjoyed when two women were involved as long as it wasn't two men... that was just wrong. No, what bothered the boy was the realization that this was not the first person his mother had snuck in while his father was defending them on the surface. What bothered the boy was his pure mother, the only woman he had ever given his respect to, was least deserving of it.

Now don't think that the - now - young man hadn't already been curious about certain things, but up to that point his mother's teaching about how to treats ladies, and the meaning of being a gentlemen, and all of that had kept his curious mind from following certain paths. After that day he stopped worrying about such silly things. There was obviously no such thing as a lady so why should he treat them like they were?

Of course the boy didn't just start disrespecting others in public, even if ladies didn't exist, he was still a gentlemen. The change could only be seen... in private.

As Gavin grew to adulthood, he realized what he was made for... he was made to rule the Undercity of Millan. The man currently on the throne was fine, for a sissy boy who didn't deserve the respect given him. Yes Augustus Malachai could be brutal, but he was no warrior... a warrior was the only one who could truly run this city and the recent attack from the uplanders just proved that. He needed to take this city... and he knew exactly how he was going to do it.

The man grew stronger, he took the harder jobs on the surface, trained longer... he became the man that could gain respect from anyone, and take it from the rest. He became exactly what he thought a ruler should be. When faced with a corrupted, the man did not freeze, but he did win every battle he ever put himself into. Whether it was brute strength or planning, nothing could beat Gavin.

He also traveled... extensively. The man visited every part of Eden and he had connections in things that most of Lower Milan would balk at. It was how he met Luceria... the woman he chose as his private pet, something he hadn't done until he met her. He didn't love her - he still couldn't believe in such a silly emotion - but he treated her in a way that he treated few females in private. Of course the woman was still an owned piece of property, therefore even in public she was to respect him as her master. Something she did rather well, which was why he decided to take her back to Milan when he was ready to take the throne.

At first he was going to take it by force, call up the army he'd gained with favors, and then he saw another way.

From the moment he laid eyes on Marguerite Malachai, he realized the way to her father's throne. Marry the daughter, kill the son... everything tied up with a nice little bow. It was perfect... until he caught sight of the librarian. Then it became even better...

It was clear to everyone that wasn't a moron - so of course that took out the girl's father and brother, as well as possibly the librarian himself - that the woman was completely enamored by the wiry man. Which is when he realized he could do more then just take the father's throne... he could finally become what he wanted to, but first there were some planning.

Fighting Style: Gavin is what is known as a powerhouse. He isn't extreamly tall, but he makes up for that with his stocky appearance and he uses that when he fights. He is able to swing a sword which much harder blows, as well as being able to launch an arrow a nice distance.

Describe your abilities via your level of taint. 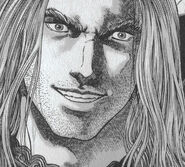 Add a photo to this gallery

Retrieved from "https://dragonscaperoleplay.fandom.com/wiki/Gavin_Pierce?oldid=6076"
Community content is available under CC-BY-SA unless otherwise noted.